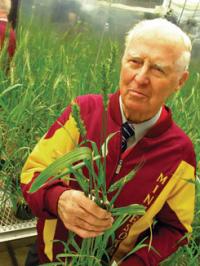 The Man Who Saved A Billion Lives

Nels ran to his grandson to see what had happened. He took his “Norm boy” (that's how grandfather called Norman) and pat at his back and told, “dear son, this hen is not sick. It just laying its egg. If it did not then how grandma give you egg to eat.” slowly he kissed him and comforted him.

Norman Ernest Borlaug was born in 1914, 25th March in Cresco, Lowa in United States in his grandparent's farm house as the first of four children. He was under the care and protection of his grandfather as his parents were busy with faming. Norman's grandfather Nels was retired but he worked around the farm whenever possible. Norman is curious to know the things around him as he followed his grandpa as he fed hens, collected eggs, pulled weeds in the garden and as many things as he could manage. Thus, he learnt to be dutiful, organized, polite and respectful of others.

Dear child, if you are a child of God, God wants you to be dutiful, organized, and polite so that your society will see Christ through your life.

At the age of five the grandfather's friend “Norm boy” started his schooling. On the way grandpa had to answer lots of question which would arise in the little brain. One day in winter, as he was walking along with other children from school he fell exhausted due to snowstorm. His  older cousin Sina brought him back home. At that time, World was panic struck under the grip of deadly influenza epidemic which had reached to rural Lowa also. Norman witnessed the death of some of his family members and the sick were isolated from others. Nels encouraged his “Norm boy” to “Do good deeds”. Little Norman helped his mother carrying pots of hot soup and food to isolated farm houses. They had to leave the food in the porch as no human contact was allowed. Little Norman's heart wept upon it.

One day Clara, Norman's mom told that she was going to deliver a baby for him. Little Norman was eagerly waiting for the day to come. A baby sister “Helen” was born and died immediately in the farm house. He couldn't control his grief and Grandpa diverted it by taking him for fishing.

Most of the time he'd wonder “Why would the grass be so green in some areas and not in others”. Grandfather made him understand the value of life without greeneries. He was very eager to attend the church gatherings and one day he heard a preacher giving the challenging message “Bread for the world, have faith and end hunger” by Bible reading.

“Many times I struck your gardens and vineyards, destroying them with blight and mildew. Amos 4:9

“Is not the food cut off before our eyes, Joy and gladness from the house of our God?

The seed shrivels under the clods, Storehouses are in shambles; Barns are broken down,

For the grain has withered. How the animals groan! The herds of cattle are restless,

Because they have no pasture; Even the flocks of sheep suffer punishment.

O LORD, to You I cry out; For fire has devoured the open pastures, And a flame has burned all the trees of the field. The beasts of the field also cry out to You,

For the water brooks are dried up, And fire has devoured the open pastures”. Joel 1:17 – 20

The preacher continued, “You were like a burning stick snatched from the fire, yet you have not returned to me,” declares the LORD. Amos 4:11

Even though Norman couldn't understand much, he recognized about the God's wrath upon the land and how he should be responsible for that. The little mind felt to do something. Thus, he worked hard in father's and grandfather's farm before and after school, on weekends and summers. He couldn't continue his junior class due to skin infection.

Norman was sent to high school in Cresco. As it was long distance to go and there were no rural school buses, grandfather encouraged him to leave the farm for his further education and he told, “Norm boy, you are wiser to fill your head now if you want to fill your belly later on.” He was allowed to stay with a family near to his school. It expanded his world beyond the farm from “farm folks” to “town folks”. On father's visit the head teacher reported that “Norman might not become a great scholar but he has great promise and determination.” Yes, it was true in the life of Norman Ernest Borlaug.

In Cresco High School Norman got much exposure to school athletic meets, football and wrestling. School principal and wrestling coach, Mr. David Bartelma used his enthusiastic and intense pressure and psychology to extract the best out of every student athlete. He encouraged the “young folks” that “if you apply simple things in your life you will find answers when problems arise” – “GIVE IT YOUR BEST SHOT” , “BELIEVE YOU CAN DO IT” , “FACE ADVERSITY SQUARELY”, “BE CONFIDENT”. As a young man, Norman applied this simple lesson in his life.

Dear child, it's wise to take advices and practise accordingly. It will give you blessing.

After successful completion, he applied for the admission in University of Minnesota. But failed its entrance exam and got admitted in General College then transferred to the collage of Agriculture's forestry program. Henry, Norman's father promised him to pay for his studies. Norman wanted his father to pay and educate his sisters, Plama and Charlotte rather than him as with his muscle power he could work and earn. He joined as a leader in federal projects with the unemployed to earn his income periodically. Many of the people worked with him were starving. It's seen along with the childhood days memories “Bread for the world, have faith and end hunger” echoing in his mind.

Norman did his MS in Science, PhD in plant pathology and genetics under the leadership of Professor Stakman. Professor insisted his former student Dr. George Harrar to recruit Norman in Rockefeller foundation as research scientist in charge of wheat improvement. Stakeman's faith and insight in Norman's ability was prophetic and he reported “Norman will not be defected by difficulty and he burns with missionary zeal”.

Dr. Norman was much concerned about the increasing population with decreasing food. He tried to figure out the problems of the production of wheat due to rust, bacteria and fungus. After completing lots of experiment, he created disease – resistance strains that withstand the harsh climate. He found that the taller stem of wheat would break fast as it cannot hold the wheat heads, he introduced short stemmed “dwarf” wheat that withstood the increased weight of wheat heads and he became well known to the world as the originator of Green revolution.

When the food production problem arose in India and Pakistan, Government requested his assistance and he introduced disease resistance dwarf wheat to both the countries and lateron, to the whole world.

Dr. Norman Ernest Borlaug was awarded the Nobel peace prize in 1970 for the life time work to feed a hungry world and he introduced various technologies in food industries to end the poverty death. He was honored for green revolution by presidents, prime ministers of various countries.

He was instructed by God to save billions of people with bread along with the word of God till the last breath on September 12, 2009 at the ripe age of 95.

Tribute given by then - Indian Prime Minister Dr. Manmohan Singh "With the passing away of Dr. Norman Borlaug, an era has ended, in which he spearheaded a scientific revolution in agriculture. At a time in the sixties when the country was facing the spectre of severe food shortages, the introduction of Dr. Borlaug's high yielding varieties of seeds set in motion a technological revolution in Indian agriculture that led eventually to the country achieving selfsufficiency in food grains. The Green Revolution lifted the spirits of the Indian people and gave them new hope and confidence in their ability to tackle the country's daunting economic challenges... Dr. Norman Borlaug's life and achievements are testimony to the far reaching contribution that one man's towering intellect, persistence and scientific vision can make to human peace and progress. One of Dr. Borlaug's favorite quotations was to 'reach for the stars'. In doing so, Dr. Borlaug helped millions of people escape from a life of hunger and deprivation. On behalf of a grateful nation, I convey my deepest condolences to the family and friends of Dr. Norman Borlaug."

Dear child, as in Amos 4:11 “if you are like a burning stick snatched from the fire, you have the responsibility to do God will through your life. And let the world know Christ through you.” “If you are not yet snatched out from the eternal hell fire, you have to know what Lord Jesus Christ did for you on the cross of Calvary. He suffered your punishment and death on the cross to rescue you from sin, Satan and death and he died, buried but rose again on the third day and is living today for you and me. Accept that you are a sinner believe that Jesus died for your sin and choose this dear Jesus into your heart as Lord and savior. Let us live a victorious Christian life like Dr. Norman Ernest Borlaug.