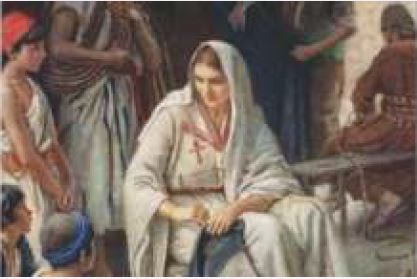 Phoebe, a remarkable and noteworthy sister of Cenchrea church became Apostle Paul's emissary with a great mission. We read about her only once, in Rom:16:1-2, that too in less than 50 words. But her commitment towards the service of God reverberates well in our minds. She belongs to Cenchrea which was a sea port town of Corinth. She could be a gentile Christian because her name has a pagan origin. Phoebe had to go to Church of Rome which was not familiar to her, but her willingness and readiness in the service of God are admirable. Romans 16:1-2 seems to be a commendation letter written by Paul to the church of Rome.

Apostle Paul addressed her "our sister”, sisterhood earned by the precious blood of Jesus Christ. She must have been a very faithful committed sister of the church of Cenchrea. It is believed that Apostle Paul had entrusted her to carry the book of Romans to Rome. Whoever is faithful with very little will be made ruler over many things. Paul beseeched Roman believers to receive her in the Lord. God expects each one of us to receive our fellow brethren with all due respect and love in the Lord. Consider all sisters in the Lord as our own sisters.

The most endearing and lovely title for any sister in the Lord is to be called the servant of Church, servant of God. Moses is referred as the servant of God in many places. 1 Chron:6 :49, 2Chron 24:9, Neh 10:29 ,Dan 9:11, Rev15:3. In all 5 places the word of God describes Moses as the servant of God. Joshua was called as a servant of God in Judg:2:8. Apostle Paul, James and Peter called themselves as the bond servant, Tit 1:1, Jam 1:1,1Pet :2:16.Therefore let us also rejoice to be called the servant of church, servant of Christ and stewards of the mysteries of God 1 Corinth 4:1. The Greekword for the servant is diakonon. Rom 16 :1, in NIV and NRSV is Deacon, Deaconess in RSV. Phoebe was regarded as the servant of the church of Cenchrea. Godly sisters who are sensitive to the need of the brethren are essential for a church. They take care of the spiritual as well as the material needs of the young and old. Such sisters look for an opportunity to serve others. They take care of every need of the assembly and love to be the part of the house of God. We notice their presence as well as absence in the church.

Phoebe as a Succourer

Phoebe has been a helper. Apostle Paul used the Greekword Prostatis (used only here in NT), which means protectress or patroness. She was a sister with some significance in the congregation. Her selfless effort of extending help to fellow believers even to Apostle Paul is praise worthy. W. E. Wine explains that Prostatis was the title of a citizen in Athens who had the responsibility of seeing the welfare of the resident aliens, who were without civic rights. Prostatis is considered as an influential person in the society. Practice of patronage was flourished in the early Roman Society. It was considered as the chief bond of human society in all levels. Tradition says influential wealthy women were patronesses, used their various resources and gifts to benefit their churches. We too can assume the word Prostatis as metaphorically used to explain her ministry to take care of the brethren including Paul. She made use of every opportunity in the service of God. She was a patroness supporting the local church in various ways. Likewise we can also be guardian to the destitute, sponsor to the needy, defender to the weak, assist in their material needs. We can be women of means, opening our houses to receive children of God, provide space for church gathering, encourage to have sisters meeting, all night sisters prayer gathering, visiting sick, taking care of the cleanliness of the house of God; extend financial help as the situation demands; teach younger sisters and children the word of God, list goes endless.

The word saint comes from the Greek word hagio means consecrated to God, the one who is set apart for the extension of the kingdom of God. Eph 4:12, 5:3 say that all the born-again children are saints. Grow more and advance to the image of Jesus Christ day by day. They exhibit faithfulness and integrity in every step of their life. What a commendable and laudable letter Apostle Paul had written. Perhaps Phoebe mustn't have realized that she had been doing such a valuable and wonderful ministry among saints. When we hide behind the cross and serve people of God, it is a silent ministry recorded in heaven. Paul 's letter was a letter of attestation about the sterling and exemplary ministry of Phoebe 's mission of errand. Apostle Paul expressed all words of appreciation for Phoebe, whereas he had to admonish two sisters who had laboured with him in the Gospel. They were Euodia and Syntyche, the sisters of church of Philippi. Phil 4: 2-3. Philippi was an important city of Macedonia. Both sisters had a blissful joyous time to work together for the furtherance of the kingdom of God. They were the fellow workers labored in harmony, hand in hand. Their names are recorded in the Book of life. They had worked with Paul and Clement too. Euodia means prosperous journey or sweet fragrance. Syntyche means fortunate or pleasant acquaintance. Yet they failed to live up to their names. They reached a turning point where neither their journey could be prosperous nor their acquaintance was pleasant. But it is highly pleasing to know how Phoebe could live successfully as per her name which means radiant, beaming /gleaming or glittering. She could live a meaningful life, radiating her life to attract many to Lord Jesus. Those who lead others to Christ shine like radiating stars. Soul winners shall shine like the brightness of the firmament. They can turn many to righteousness like the stars for ever and ever. Dan12:3. But to Euodia and Syntyche Apostle Paul says “Ye may be same mind in the Lord”. Apostle Paul emphasizes on Christian unity. Rom12:5, "so we, being many, are one body in Christ and individually members of one another". In 1Cor: 1:10 he says "----- you be perfectly joined together in the same mind and in the same judgement". Apostle Paul is exhorting to keep the unity of spirit in the bond of peace. Apostle Paul is a good counsellor too. Though he had to reprimand them, he didn't forget to point out the great service they had accomplished in the name of the Lord. Human tendency is just to forget all the benevolence one has done if a little frailty comes up against him. Apostle Paul never wanted to discourage them. He never thought to silence them or substitute someone else in their places. He said, "help these women"(Phil. 4:3). Paul with a merciful fatherly affection tries to lift the fallen babies while walking. Or like a shepherd he wanted to take care of the wounded sheep, tried to bind up and patch up the broken relationship. At times fellow companions may disappoint you. Let's take every situation in our life as a God's provision to learn tolerance and perseverance. If you accept the heavenly call, be ready to wash the feet of fellow brethren in all humility. Backslidden sisters, once they are restored to the joy of salvation, they would be used for Lord's glory than ever before. It's because of the lessons they learnt in tears at the feet of Lord Jesus. Learn to forgive, "love endures everything ",love suffers long" hopes all things, love is not provoked".1Cor 13. In Mat 18:15 Lord says" if your brother sins, go and reprove him in private. It's our responsibility to take the initiative, not the one who had hurt us. Word of God says forgive 70×7 times. It is a simple formula but an excellent guide line. Avoid discussion and long talk about such issues which often become gossip, eventually as a sprain or a dislocation leading to a fracture, when treated in a wrong way. Find out the root problem. After much prayer and supplication in all love and meekness, correct very gently. Sit and pray together admit our worthlessness and exalt Lord Jesus who is worthy to receive all glory. Let the words be salted with grace. Avoid words of accusations which are caustic and abrasive, can only burn the relationship. As Apostle Paul says if one member suffers, all the members suffer with it ". 1Cor12:26 Lord Jesus Christ has purchased fellow sister also with a great ransom. "I bore him in pain” 1Chro:4:9. Every child of God is precious to the Lord. Like Jabez let us also pray “I may not cause him pain ".1Chro 4:10. Let us be like Phoebe ready for the service of God, a helper, a dear sister, succourer, always radiating the love of God.

Felicity Mathew is a retired school Principal residing in Mumbai. She ministers among children and sisters