Sanskrit, The Bible and the Sanskrit Bible 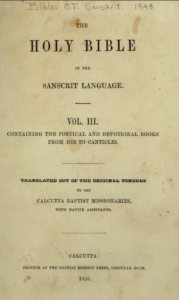 Sanskrit is one of the oldest languages known to man; with a documented history of about 3,500 years. That is as old as the times of Moses. The oral traditions would go even further back in history. However, Sanskrit in its modern form (known as Laukika or Classical Sanskrit) is solely based on the codification works of the great grammarian Pā ṇ ini in his book called Aṣṭādhyāyı̄ (literally: Eight Chapters) by around 500BC. Interestingly, it is this very same Sanskrit we use even today, after almost 2,500 years!

A brief on Sanskrit

The meaning of the work Sanskrit is “refined”. In fact, this was a language that was refined out of the then prevalent spoken language known as Prakrit. However, Sanskrit being a structured and organized language with well written grammar codes and usage instructions, one had to properly learn Sanskrit from a guru (teacher) in order to use it properly. Thus, Sanskrit remained the language of the learned, used by the intellectual mass and flourished through their innumerous writings, and also as a liturgical language.

The common people continued to use Prakrit for their daily communication needs. Both these languages (Sanskrit and Prakrit) co-

existed for a very long time. Prakrit language later evolved with various regional languages like Hindi, Bengali, Assamese, Kashmiri, etc. Sanskrit, credits again to its codification by Panini, never underwent any major evolution and remained as it was till date.

Soon after landing in India in 1793 with the motto: “Expect great things from God; attempt great things for God!", Carey realized that Sanskrit is the mother or, least, the foster mother of almost all Indian languages and rightly the key to open India for the Lord. He believed that having a Bible in Sanskrit would not only secure direct access to the learned class (pundits) but also would serve as the master text for translating Bibles into other vernacular languages of India.

Discovering Sanskrit – the ideal match to Hebrew and Greek

The general perception among missionaries who were also Sanskrit scholars was that: “Such, indeed, is the exuberance and flexibility of Sanskrit language and its power of compounding words that it will probably be found, next to Hebrew and Greek, the most expressive vehicle of Christian truth.”

In fact, there is said to be no other language in the whole world that could capture the literary quality and

clarity of expression of Hebrew and Greek texts like Sanskrit. The missionaries were so captivated by the potential of Sanskrit language and its ability to create poetry with such accuracy and ease that they decided to translate Bible just as it is in the original tongues. That is, where ever poetry was used in the original Bible languages, Sanskrit also uses poetry and so on. Maybe, this could be a unique aspect of Sanskrit Bible.

Impressed by Sanskrit and its sway over the Indian intellect, Carey took pains in learning Sanskrit shortly after he arrived in India. With ample assistance from local pundits, he simultaneously started translating Bible into Sanskrit language. By 1808, he could publish the Sanskrit New Testament and in 1818 the Sanskrit Old Testament also got published. However, we don't seem to have any authentic copies of this original William Carey translation of Sanskrit Bible. Even during those times, the general perception among the scholars was that “his translation was not satisfactory on any other grounds than general faithfulness”.

William Carey - a life well spent for the Lord

In 1834 Carey, known as the Father of Modern Missions, was promoted to glory leaving a plethora of great things that he attempted for the Lord. Apart from the Bibles and dictionaries in various Indian vernacular languages, Carey was also instrumental for many key social reforms of India, including the abolition of infanticide and widow burning (sati). He even was a horticultural expert who had a private collection of botanical specimens which was second only to that of the British East India Company's Botanical Gardens at Calcutta.

The beacon is passed on

After Carey, the Calcutta Baptist Missionaries continued the task of refining the Sanskrit Bible. William Yates (1792-1845), who was trained under William Carey, took upon himself to carry forward this mission. Thus in 1841, they could publish a revised translation of the New Testament. It was Yates who gave the Sanskrit Bible its academic precision and structure. He was the one who insisted that poetry in the original tongues should be retained so in Sanskrit as well.

In 1851, his translation was further revised by John Wenger (1811- 1880). Wenger had a natural proficiency with Sanskrit and had extra ordinary literary skills. In him both passion and perfection embraced each other. Consequently, his version of Sanskrit Bible is considered as the most academically acclaimed and truest to the original tongues.

In 1886 there was another revision to Sanskrit New testament where many verses were rephrased in a more simplified manner. We are not sure whether there were any further revisions to this original translation.

The Calcutta Baptist Missionaries also published the revised Old Testament in Sanskrit as four volumes in 1848, 1852, 1858 and 1872. These again, were largely the contributions of John Wenger.

It is said that: “if Carey was the Wycliffe and Tyndale, Yates was the Coverdale of the Sanskrit Bible. Wenger, their successor, was worthy of both.” Interestingly, the same could be said regarding these three great men of God with respect to various other Indian vernacular Bibles including Bengali, Oriya, Assamese, Marathi and Hindi. Such was the profound contribution to the Indian

Christian movement by this great trio who attempted great things for the Lord.

However, by the fag end of 19th century, for reasons unknown to us today, the interest of missionaries in Sanskrit dwindled away. There were hardly any further revisions or prints of Sanskrit Bible and we were left with a handful of the hard copies in some old western libraries as archives. All through the 20th century Sanskrit Bible was largely a forgotten entity. At times, The Bible Society of India (BSI) occasionally printed the 1886 version of the Sanskrit New Testament. The Sanskrit Old Testament was forgotten in its entirety.

The desire of Carey and his team that Sanskrit Bible could become a great influence among the learned mass of India remained a distant dream. Same fate was reserved for their intention that Sanskrit Bible would serve as the master text for translating Bibles into other vernacular languages of India. The reasons could be anything from sheer negligence to change of times.

The ruby shines forth

God never forgets! With the advent of technology, cataloging of old books and free sharing of knowledge which marked the beginning of 21st century, we got access to the digital scanned copies of Sanskrit Bible that were made available in internet archives. It would be remarkable to note that these scanning and archiving exercise were purely an academic endeavor and had nothing to do with any religion or spirituality per se. By sheer Grace, it so happened that the 19th century Missionaries had gifted the hardcopies of the Sanskrit Bibles (both NT & OT) to various western libraries. These libraries had preserved them in pristine conditions and later made them available as digital scans for the public.

The revival of Sanskrit Bible

The 1851 edition of Sanskrit New Testament that was revised by John Wenger and published by the Calcutta Baptist Missionaries was used for this purpose. Sanskrit language doesn't have a native script as such and thus could be written in any script like Devanagari, English (Roman), Tamil, Malayalam, Urdu, etc. There is no peculiarity to any script!

Accordingly, SanskritBible.in has released the Sanskrit Bible (NT) in 22 different scripts. They could be accessed directly from www.SanskritBible.in with ease. Provisions for script conversion and comparative inline /parallel Bibles in almost every major Indian and global languages are provided. The site also hosts a simplified Sanskrit tutorial based upon Sanskrit Bible.

Sanskrit Bibles (in all 22 scripts) are also made available through popular Mobile Bible apps like YouVersion, QuickBible, MySword, e-Sword, etc. Just search for "Sanskrit" in these apps and download the Sanskrit Bible in the script of your choice directly from their servers.

The eBook modules could be downloaded directly from SanskritBible.in website.

SanskritBible.in also has an account with The Digital Bible Library Database. All Sanskrit texts are set to 'Open Access' for anyone to use freely. This would enable Bible website and app developers to incorporate Sanskrit Bible also in their offer.

Sanskrit Bible is released under CC Attribution-ShareAlike License and everyone is encouraged to freely read, download, use and share the Word of God.

A note to the future

In the making of Sanskrit Bible Carey and his fellow missionaries had indeed attempted great things for the Lord. Their expectation of great things from the Lord is still a work-in- progress. God will surely make it to fruition.

For feedback and clarification, please write to sanskritbible.in@gmail.com

This article appeared in the March 2019 publication of Harvest Times.

Tags: GLS, Harvest Times for your family, Manu Thomas, Sanskrit, The Bible and the Sanskrit Bible
The word of GOD is living and powerful
LIVE YOUR FAITH; SHARE YOUR LIFE